A Geological Milestone of Atlantis Research

In 1944, the Swedish Oceanographer Hans Pettersson put forward for the first time a scientifically sufficiently substantiated and convincing argumentation that Atlantis cannot have existed in the Atlantic, i.e. in the place where Plato saw Atlantis. 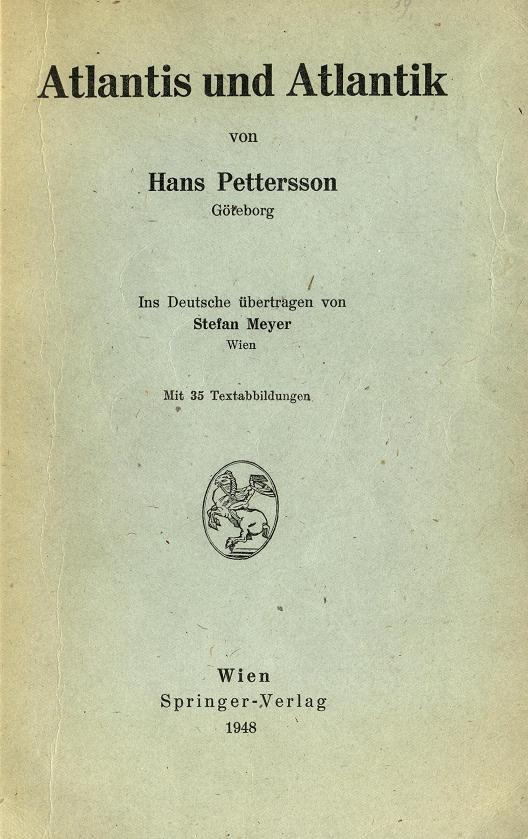 The problem of the vast number of localization attempts for Plato's Atlantis  often at the most unlikely places  is well-known. Less known is that if considered under a historical perspective many of these attempts are not so much senseless as it seems from today's perspective. This is valid especially for the localization of Atlantis in the Atlantic where Atlantis allegedly was situated according to the words of Plato's dialogues.

Not before 1944 academia put forward a publication which sufficiently evidenced that Atlantis could not have been situated in the Atlantic. It was "Atlantis och Atlanten" by Hans Pettersson (1888-1966) who studied nuclear physics, and was a pioneer of Swedish Oceanography, founder of the Oceanographic Institute in Gotenburg. Pettersson managed to get attention for his case in a broader public by numerous popular science publications. Part of the series of these publications which were scientifically substantiated yet targeted to a broader public was "Atlantis och Atlanten".

As Pettersson wrote correctly the geological question of Atlantis arose in its urgency latest with the publication of Ignatius Donnelly's "Atlantis  The Antediluvian World" in 1882. The brilliant but eccentric amateur Donnelly focussed on geological aspects, too, and managed to excite the interest of the masses for Atlantis and to inspire some academicians to new thinking. In 1913 the geologist Pierre-Marie Termier held his widely noted lecture which for the time being supported scientifically the belief in Plato's Atlantis in the Atlantic.

Many are not aware of the fact that the theory of continental drift founded by Alfred Wegener which we today know as "plate tectonics" and which seems so self-evident to us, was accepted only very late, namely in the 1960s and 1970s. In 1944 when Pettersson published his work, this theory of continental drift still was in the process of gaining acceptance and there still were serious opponents.

Thus, Pettersson discusses as well the theory of land bridges which connected the different parts of the earth. These land bridges are postulates of paleozoology and paleobotany which drew the inevitable conclusion from the occurance of similar animals and plants in different parts of the earth, that there must have been land connections between the parts of the earth. Among them is also the continent Lemuria spooking around still today in pseudo-scientific Atlantis literature, which allegedly connected Madagascar with India, as well as a scientificallly seriously considered land bridge between central America and Gibraltar, called meaningfully "Archatlantis".

So, modern science for a long time cultivated similar views as once Aristotle had of Plato's Atlantis: Because of the occurance of elephants at Gibraltar and in India Aristotle implicitly postulated a sunken land connection of both places in the Atlantic; a land connection which according to Aristotle had connected the land mass of the northern hemisphere which lay like a band around the globe, to a continuous and symmetrical band. More on this and on the wide-spread error that Aristotle spoke out against the existence of Atlantis see in Franke (2010/2012). 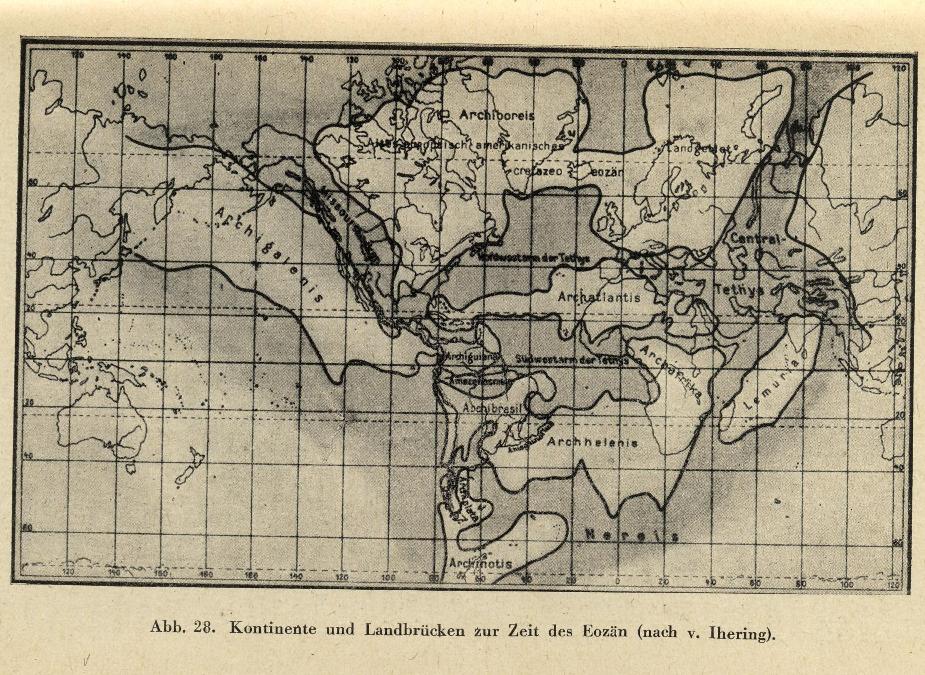 Pic. 28. Continents and land bridges in the Eocene (according to v. Ihering).

But most correctly Pettersson points out that these land bridges  if they existed  are out of the question for Plato's Atlantis since they existed millions of years ago and did not sink just in the postglacial era.

According to Wegener's theory of continental drift these postulated land bridges never existed but the land connections existed in the previously connected continents before they drifted apart. Continents do not just sink, too, as can be seen e.g. in the lack of deep ocean sediments on land, they only move horicontally on the earths surface. Thus, there never was a larger island in the Atlantic which sank. The movements are ongoing since millions of years what again makes an Atlantis after the last ice age impossible. The Mid-Atlantic Ridge to which belong the Azores, too, is no sunken land but to the contrary, it is erupting volcanic material as a consequence of continental drift.

The Azores as place of Atlantis

For the Azores Pettersson concedes that a heavy change of the level of the land (NB: not of the sea level) is theoretically possible because of major seismic activities. Yet a first objection is that even a major change in the level of the land would result only in the creation of a rather small island since the Azores are towering extremely steep and high above the sea floor.

Pettersson writes at length about the Atlantis lecture of the French geologist Pierre-Marie Termier from 1913. Termier analyzed a piece of rock which was brought to light from the sea floor in 1898 during cable works. It is a tachylite i.e. lava rapidly cooled to a kind of volcanic glass which was only little affected by sea water. Termier believed that lava could not cool down to volcanic glass under the pressure of the sea, and that the sea water had to have more effect on the lava's surface. So he concluded that the sea floor from which the tachylite came once lay above water, so that the lava could cool down to volcanic glass. And he concluded that this happened not more than 25000 years ago since the sea water affected the lava's surface only little. Until today, this opinion of Termier is taken as a proof for Atlantis in the Atlantic in pseudo-scientific literature, without mentioning counter arguments. 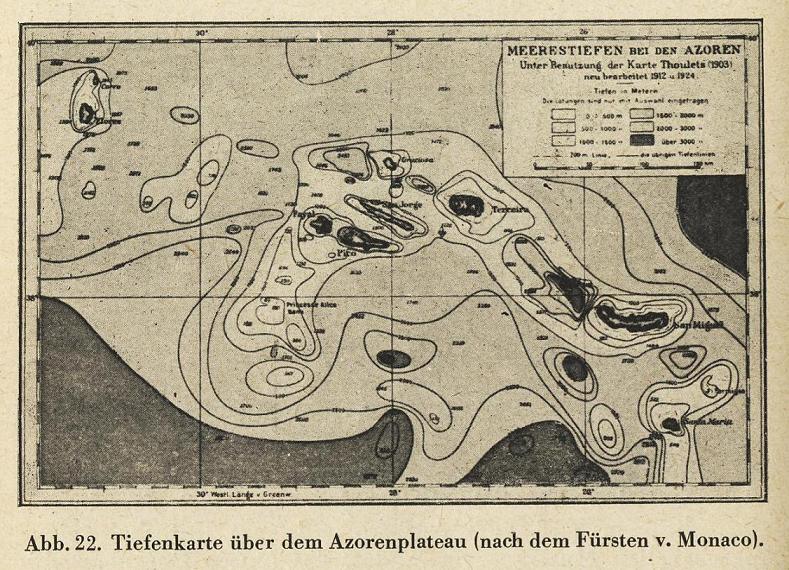 Pic. 22. Map of sea depths around the Azores' plateau (according to the prince of Monaco).

Pettersson opposes Termier's theses with the statements of the Swedish geologist Arvid Gustaf Högbom from 1938: He judges Termier to be too credulous and expresses the opinion that lava can cool down to volcanic glass even under water. The little affection of the tachylite's surface, too, may not be interpreted with such a narrow view as Termier had. Högbom counters the "atlantomaniacs" as he calls them with the following counter evidence: The rocks which were transported by icebergs during the ice age to the Azores all settled down near today's coast line. This means that the level of land and sea since the last ice age was approximately the same as it is today. Alternatively, Högbom suggests the North Sea to be the place of Atlantis.

Changes of sea level instead of changes of the land level as justification for a larger island at the Azores are again consequently excluded by Pettersson. Even the heaviest icing would make the sea level drop only by ca. 200 meters but only above a level change of 2000 meters the Azores would start to form a still relatively small island.

Pettersson also does not miss to think about phantastic intellectual games such as the idea of a second moon which is discussed in pseudo-scientific Atlantis literature. This second moon allegedly always had been on the same side of the earth, so that he rotated in 24 hours with the earth, thus provoking a steady tidal wave which freed the Mid-Atlantic Ridge permanently from water. Because this moon was so near he provoked a many times larger tidal wave as does our moon today. Finally, the second moon came too close to earth and allegedly bursted which resulted in a sudden inundation of the Mid-Atlantic Ridge. Pettersson correctly judges such unfounded speculations and calculatory games as fanciful follies.

Following Högbom's statements the oft-cited sentence is put forward: "Under a geophysical perspective Plato's Atlantis is dead and no geologist, even not the most renowned one, is able to bring it back to life."

Atlantis as a memory?

According to Pettersson, Plato's Atlantis story could have nothing but a minimal historical background: Stone Age tribes may have taken refuge from smaller sinking islands in the Atlantic to Africa and Spain. A dark memory of these events may have survived until Plato's time. Completely impossible and clearly an invention by Plato are attacks of Atlantis against Egypt and their advanced civilization.

Pettersson excludes a localization in the Mediterranean since this does not harmonize sufficiently with Plato's descriptions. The thought of a historical-critical interpretation of the Atlantis account which does not principally exclude such interpretations does not occur in Pettersson's work. Rather he bases his views on the philologists of his time who considered Atlantis to be Plato's invention.

Additionally, Pettersson discusses Europe's settlement by Neandertals and Cro-Magnons. But in Greece  where according to Plato primeval Athens existed  there is evidence that there was no postglacial advanced civilization. Pettersson correctly points out that shortly after the ice age an advanced civilization is completely impossible, independently from its place. Yet, for ancient seafaring Pettersson concedes the basic possibility to reach the Azores. His evidence are Carthaginian coins found on the Azores.

A work written with credibility

One of the reasons, why it is Pettersson's publication which deserves to be named a milestone in Atlantis research, is that this publication is written "sine ira et studio". Pettersson does not demonize Atlantis searchers but disproves the possibility of Atlantis in the Atlantic step by step, factually and fairly. Pettersson even is not silent about still existing open questions, such as the formation of river valleys in the continental shelf.

In a likewise convincing manner Pettersson describes the backgrounds and developments of geology and oceanography and presents various theories and analytical methods of these disciplines. It is a work written like a popular science book but based on solid scientific ground.

The publication "Atlantis och Atlanten" by Hans Pettersson from 1944 is a milestone of Atlantis research. For the first time it has become scientifically sufficiently substantiated that the location of Atlantis in the Atlantic, i.e. the place of Atlantis according to Plato's words, can be excluded. We cannot complain that Pettersson excluded every historical-critical interpretation of Plato's dialogues, too, which sees Atlantis maybe as a place in the Mediterranean: As an oceanographer he did good work in his field and for the rest he relied on the results of the philology of his time. A direct successor in the spirit of Pettersson is Zdenek Kukal with his 1984 work "Atlantis in the Light of Modern Research".