A phoenician Atlantis stone and the Atlantis manuscript of a certain Eumalus of Cyrene: Forgeries!

In 1828 two spectacular findings excited the world of scholars: A stone excavated on Malta showed a phoenician inscription which mentioned Atlantis, and a manuscript found on Crete in which a certain "Eumalus of Cyrene" cited passages about Atlantis from the lost "History of Libya" of Aristippus, a direct disciple of Socrates! Both findings said that Malta was the mountaintop of the submerged Atlantis. 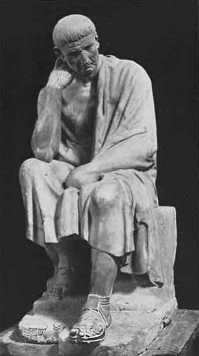 The two "discoverers" were Agricol-Joseph Marquis de Fortia d'Urban from Avignon, an internationally renowned private scholar and historian, and his acquaintance Giorgio Grognet de Vassé, a French military architect and constructor of the cathedral of Mosta on Malta according to the model of the Pantheon. Its cupola is still today one of the largest unsupported cupolas in the world. Grognet had chosen Malta for his new home and was enthusiastic for Maltese history.

Allegedly, already in 1821 the manuscript of Eumalus was found by a Samian named Ariston in Candia (today Heraklion) on Crete. Ariston travelled together with a friend of Grognet named Domeni de Rienzi. Grognet is said to have ordered a certain Pezzali from Parga to produce an Italian translation of the manuscript.  In 1826, allegedly the Atlantis stone was found by the Maltese priest Joseph Felix Galea. As Grognet, Galea had made acquaintance of Fortia in Rome. Galea is said to have informed Grognet and Fortia and to have given the stone to Grognet. Ordered by Grognet, a certain Cannolo had then produced a Latin translation of the stone.

In 1830 the first edition of "The Historical Guide to the Island of Malta and its Dependencies" by Giuseppe Pericciuoli Borzesi was published. It contained the Latin translation of the Atlantis stone by Cannolo.  In 1832 a second, identical edition of the "Historical Guide" was published anonymously still with the date 1830, extended by an appendix with the Italian translation of the manuscript of Eumalus of Cyrene. It is assumed that Grognet was the anonymous editor.

In the meantime the learned public had debunked both findings as forgeries. The statements of the stone and the manuscript contained many anachronisms which excluded their authenticity. Furthermore, always only lithographies of the Atlantis stone as well as Latin, French or Italian "translations" of both objects were made accessible. The stone and the manuscript themselves were never presented.

Fortia conceded the Atlantis stone to be a forgery, but he loaded off all the blame onto Grognet. Grognet, however, never admitted that the Atlantis stone was a forgery. The owner of the manuscript of Eumalus of Cyrene, Ariston, allegedly passed away, soon. His heir Domeni de Rienzi was  so it is told by Fortia himself  robbed in Nauplia, and emigrated via Egypt to India. Thus, the manuscript was "lost", before anybody could have examined it. Possible witnesses could not be asked any more, too.

A thorough clarification of the hoax was worked out in 1832 in a lecture held in Berlin by the German philologist August Boeckh. It was published in 1833 in Latin in the journal "The Philological Museum" in Cambridge. This journal was dedicated to the new comparative philology, developed primarily in Germany. The German criticism of biblical and classical texts coming along with a more liberal understanding of religion came into conflict with conservative views in Britain.

Boeckh attributes the main guilt for the hoax to Fortia d'Urban. Fortia had published learned theses on history, chronology, geography and philology, thus he impossibly could have fallen for such a hoax. Furthermore, the forged texts show conspicuous correspondencies with the works of Fortia, such as speculations on Atlantis, Ogyges, the Babylonian king Ninus and the biblical Noah. Grognet in contrast had not the education which is necessary to produce the forged texts. Thus, Grognet as well as the priest Galea are judged by Boeckh to be accessories of Fortia d'Urban. Boeckh also reports that already in 1824 a forged phoenician stone was presented by Grognet and Fortia, yet without reference to Atlantis.

Because the false information of these forgeries had begun to creep into established science, Boeckh wrote this elaborated rebuttal. A partial clarification of the hoax can also be found in a contribution to the "Melita Historica" by Albert Ganado from 2004.

Unfortunately, the hoax lives on up to our days as unsuspecting error. Especially the error about an ancient author who never existed is of weight. In 1907 a certain Michael Kröll saw in the writings of Eumalus a confirmation of Plato's descriptions of Atlantis, cf. Kröll (1907) p. 124. Still today the error is spooking through the Atlantis literature, cf. e.g. Mifsud et al. (2000).  Since Boeckh's lecture is in Latin and thus it is not accessible for the average reader, it was time to write an accessible rebuttal of the error. This is done hereby.

The question whether Malta was Atlantis or not, is of course still not decided by this. Especially Boeckh who appears in the role of an Atlantis skeptic was in truth skeptical towards Atlantis skepticism. In a letter to Alexander von Humboldt he wrote on March 27th, 1833, i.e. one year after his lecture on the Atlantis hoax of Fortia and Grognet: "Concerning Atlantis I cannot convince myself that it is all Plato's fiction". (German: "In Rücksicht der Atlantis kann ich mich auch nicht überzeugen, dass alles fiction des Platon sei"; Werther (2011) p. 61)

A more Greek-like transcription of the latinized Eumalus is Eumalos. It is preferred in German literature.  Often "Eumelus" is written instead of "Eumalus", probably because the name is confused with the name "Eumelus" in Plato's Atlantis account.  Sometimes Grognet is written "Grongnet".  The name of Marquis de Fortia d'Urban is alphabetically ordered by "Fortia". The "de" is written only in connection with "Marquis de".

Pericciuoli Borzesi (1830): Giuseppe Pericciuoli Borzesi, The Historical Guide to the Island of Malta and its Dependencies, Government Press, Malta 1830.
https://archive.org/stream/historicalguide00borzgoog#page/n62/mode/2up
(No copy with the appendix from 1832 is available in the internet.)

In response to this article Anton Mifsud published on January 1st, 2014, the following text on Atlantipedia.ie:
http://atlantipedia.ie/samples/document-010114b/

I leave it to the reader to make up his own opinion.