Reviewed by Thorwald C. Franke, Atlantis Newsletter No. 176 (25 July 2021). With thanks to the editor Books on Demand, Norderstedt, who kindly offered this book for reviewing. 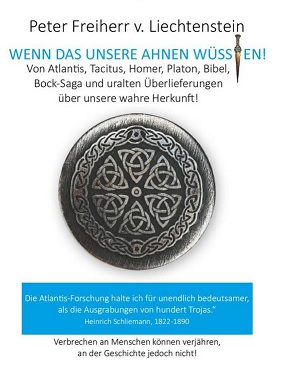 The book "Wenn das unsere Ahnen wüssten ..." by Peter Freiherr v. Liechtenstein is an exemplary case of a pseudo-scientific work. The author and the content, as well as the perspective chosen and the formal treatment of the subject are obscure, wrong or insufficient, and practically demand faith from the reader against all reason, instead of informing the reader in a comprehensible way.

The author "Peter Freiherr v. Liechtenstein" cannot be found in the vastness of the internet. But even in the book itself one learns nothing about him. Usually there are a few short words on the back flap of a book's dust jacket to orientate the reader about the author. Here, however, nothing. The author is so unknown that it is probably a pseudonym. There is no possibility to contact the author. Why is an author hiding who puts forward such far-reaching theses?

The content combines well-known themes from other pseudo-scientific works into one big mix of myths: a dangerous – because untrue – cocktail of Germanic tribes, Celts, Greeks, the Bible, late bronze age Sea Peoples and Atlantis is stirred together. The core message: civilisation came from the "North". The book is so shallow that it doesn't even bother to distinguish different stages of culture. The fact that civilisation developed gradually, and in this respect has no particular place of origin but many places of origin, is omitted. To attribute the achievements of the Greeks to the "North" because their ancestors once immigrated to Greece from the "North" (but probably rather from the "East" than from the meant "North") is gross nonsense. It is also completely insane how the book practically assumes a harmonious unity of the Germanic, Greco-Roman and Christian heritage, because in the sense of this book it all comes from the "North" from the beginning. What is perhaps innovative in comparison to other works of this calibre is the replacement of the Oera Linda book by the Bock saga. Both are forgeries or modern inventions. Any alternative view of the chosen themes is completely ignored.

The book's perspective is dangerous because it is wrong: it constantly insinuates that we today are or should be practically directly identical with our Germanic ancestors. It is one thing to see our predecessors in the Germanic peoples and to appreciate this, as a healthy national consciousness does. But it is another thing to ignore the cultural and political developments that have taken place since then. We Germans are no longer Germanics, but "Deutsche", a cultural nation which developed over a long time. The book's perspective is also dangerous because partially justified criticism of the currently ruling political parties and their actors is gratefully taken up by this book and interwoven and charged with nationalist and racist motives and conspiracy theories. The conspiracy theory is blithely spread that – this impression is given – according to Churchill, the Second World War was not about Adolf Hitler and National Socialism, but about the enslavement of the Germans; and that this is still the case today (p. 20).

Formally, this book is a disaster. There are no footnotes. There is no bibliography. The whole book is a string of mere assertions. An orgy of incoherent quotations, arbitrary linguistic analogies and wild mythical associations. There is nowhere to stop here. The sentence "In this book I will take special pains to substantiate the facts with scientific findings and research" (p. 20) is pure mockery. Anyone who wants to invest even a spark of reason must constantly do laborious research to find out what is true about the theses presented. Most of the time it turns out that the author has interpreted his sources quite generously. For example, the study on the genetic origin of the Philistines, of which the bibliographical data remain unnamed so that one cannot look it up, is quoted to the effect that the Philistines came from "Europe" and immediately there is a reference to Spanuth's Northern Peoples. But the fact that the study speaks of southern Europe remains unsaid (p. 58).

Horrendous errors are found. Solon is described as "a high-ranking man from Egypt" and as a "statesman of Egypt" (p. 24). Plato was only the transmitter of the texts (p. 24). Krantor would have seen the same papyri in Egypt as Plato (p. 28). Solon is implied to have gone to Egypt precisely because he wanted to learn about prehistory – the Egyptian priests in Sais are implied to have made the study of the past their main work (pp. 27, 28). The age-old hat about Paul Schliemann and the forged will of Heinrich Schliemann is brought up again, and the truth of this tale is cheekily asserted: "It all sounds like a Hollywood movie now, but that's exactly how it was" (p. 30).

Names are misrepresented. For example, Athanasius Kircher becomes "Peter" Kircher (p. 224) The town of Sais becomes Sias (p. 27). Etc. etc. And again and again, in the midst of the greatest conspiracy-theory and "Germanic" nonsense, there are quotations from ... Jesus. One can hardly believe it. At the same time, the forced conversion of the Germanic tribes to Christianity is lamented (p. 152) ... It becomes clear: someone doesn't know what he wants. Or he doesn't care, as long as a certain clientele only likes his book. In those circles still remaining in the German AfD party, which has become radical right-wing, there are many confused minds that tick in exactly the same way, and are unable to integrate their anger about this and their anger about that into a consistent world view – because they lack reason, truthfulness and a love of order.

A factually wrong and morally reprehensible book. Chaos reigns here instead of order. Insofar as Germans can be said to have a love of order, this is a very un-German book.