Flint Dibble on Archaeology and Atlantis 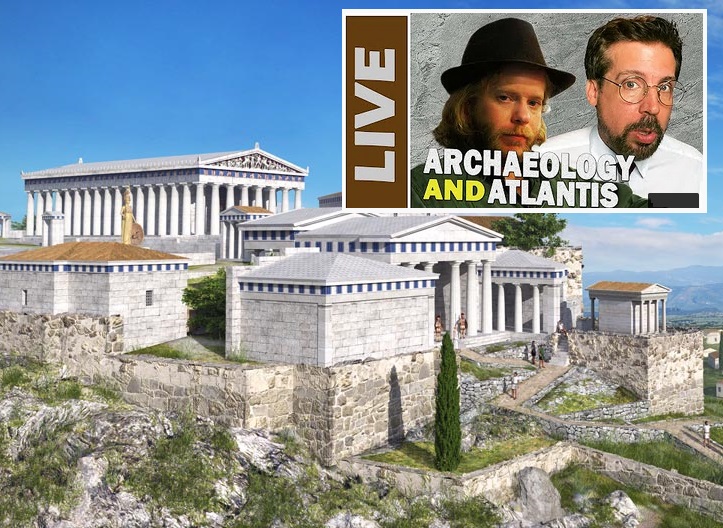 The interview is absolutely worth watching in every respect: Go for it!
I suggest that you read my following comments only after watching.

Interview with Flint Dibble on David Miano's youtube channel.
The interview begins only 30 minutes into the video, and lasts 1.5 hours.

What Flint Dibble talks about near the end of the video is the most convincing: Making Fourier transformation (!) to find traces of disintegrated bones, Greeks eating dogs, and hard life conditions with many children dying early, etc. etc. This is really interesting, and here you realize that Flint Dibble is really speaking with expertise.

But concerning Plato's Atlantis, Flint Dibble is ill-advised by his contemporary fellow scientists in the Classics department, so to say, who have varying pet theories on the topic, and each of them happily ignores what his (or her) fellow Classicists wrote about Atlantis, because ... nobody really takes the topic seriously. Which is the origin of all evils in this respect. The more you read what today's scholars produce about Atlantis, the more distant a consolidated theory about Atlantis as an invention becomes: It's a terrible self-contradictory mess.

First Flint Dibble says, that the Atlantis story itself makes it explicit that it is not a true story. But then, he takes refuge to the twinkle of an eye and the phrase "tongue-in-cheek" (between 41:45 and 44:10). Which simply means that he sees irony, but no (!) explicit disclosure of the story not being true. This is a major difference. There is a reason why the debate about the truth status of Atlantis goes back right to Plato's time, with Theophrastus, Crantor, Posidonius and many others in favour of its existence, until today. No, it was not Donnelly. Donnelly was only a great popularizer.

It is my opinion that exactly the harsh abandoning of the topic by science at the end of the 19th century unleashed the hell hounds of pseudoscience. Because there is no serious talk about Atlantis being real today, which would install some guard rails and would address legitimate questions. David Miano and Flint Dibble say themselves on pseudoarchaeology in general that not every wrong hypothesis is "pseudo". Indeed. It would be a great achievement, if this realization would be applied to Atlantis hypotheses, too. These hypotheses should not be all lumped together als pseudoscience, but it should be granted that there are hypotheses of higher quality which are not pseudoscience but – if it is their opinion – "only" wrong, e.g. some of the Atlantis hypotheses about the Minoan civilization published by "real" scholars.

Yes, Flint Dibble is quite right: We have to look at the setup of the story. But the setup does not point to an invented story.
(a) The fact that the dialogue is purely fictional says nothing about the fictionality of its contents. E.g. the fact that earth is a sphere is mentioned for the first time in human history in a so-called Platonic Myth in the dialogue Phaedo. I suggest to consider the fact that earth is a sphere not an invention.
(b) In the Republic, Plato explicitly says that good approximations to the ideal state existed in the past and will exist in the future. Of course, since he believed in a cyclical model of history. This is an important part of the setup!
(c) The Timaeus starts with the plan to invent the story. Yes, to invent. But then, there is a turn in the dialogue: Critias comes along and says, he has a real story which fits quite well (and no, not for 100% as many impute to the dialogue). Socrates agrees, and says, that a real story as the basis is better. Of course. Would any reader disagree, ancient or modern? This way of telling the story may still be open for an interpretation as a deception, a Noble Lie, which the reader should not recognize as a fiction, but not as an openly invented story.
(d) As Flint Dibble rightly says, Critias "pretends" the historical Athenians to be citizens of the ideal city. What does this mean? That the historical Athens was the ideal city? No! It means the opposite! It means that the historical Athens was not the fully perfect ideal state, otherwise there would be no need to pretend it. Using a historical story as a basis and supplementing it with the ideal is rather a hint that the historical story is realistic. It would be a hint for invention if it was the other way round: If the historical story already had contained the perfect ideal state.
(e) The words about painting human beings is not at all proving an invention. Because the comparison with the painting is for Timaeus as well as Critias. And Timaeus is telling a very factual story, a cosmology. By the way, Timaeus is afterwards called a "poet" for his presentation. But this does not mean that his cosmology was just some invented poetry. Not at all. Poetry for Plato is not the same as invention.
(f) Entertainment: Philosophising with Socrates in a garden in Athens is entertaining and should be entertaining, of course!

It is not fair to say that Atlantis searchers just arbitrarily redate Atlantis. Well, granted, some do. But the Atlantis story is allegedly a story from Egypt. Therefore it is a major part of the whole setup that in Plato's time Egypt was believed to be 11,000 and more years old. This is an error of course. But an important error concerning the dating. Several scholars have acknowledged that this means that the 9,000 years point in truth to a time after 3,000 BC, when Egypt was really founded (e.g. Alfred E. Taylor, John V. Luce). This is not cherry picking neither "dividing by ten" neither "telephone". This is just logic which is valid even in the case Plato invented it all. Even an invented Atlantis would be placed in time after 3,000 BC. That only few scholars discussed and realized this says everything about the state of the current scholarly debate on the matter.

I do not agree that Plato's descriptions of Athens are an argument against Atlantis being real. Because, everybody interprets it as Plato's own theories about the past, supplemented to the story from Egypt. The erosion by rain, the greater Acropolis: This is what Plato really believed to be true, though it was not. But this we know only today. Of course, this is no proof in favour of a real Atlantis, either. – And it is not correct that Plato points to the exact temple of Athena before the Persian Wars, or to the Bronze Age walls around the Acropolis as we still can see them. The temple and the wall are mentioned in so general terms that it is not possible to see a link to these buildings as we know them. Althemore, since Plato believed in a cyclical theory of history, and primeval Athens is said to have existed before a series of devastating catastrophes which allegedly destroyed everything. Therefore, there is also no self-contradition in the text. The alleged self-contradition is based on confusing our modern assumption that Plato hinted to the Bronze age with Plato's view. But in the eyes of Plato, he hints to 9,000 years before his time, which for him was a date after the foundation of Egypt, and Plato had no idea of the Bronze Age and all the other things we know today.

It is too much said that the dialogue participants of the Timaeus-Critias could not have met. There is a great debate about this, until today. If you assume Critias to be an elder Critias of whom we know, then they could have met. There even seems to be a certain tendency to accept that it was the elder Critias. But nevertheless, the dialogue itself is fictional, of course. No important aspect.

There has at least been one constructive result of Flint Dibble's Twitter attack on any kind of Atlantis hypothesis. It made me establishing the page "Against the 10,000 BC Belief Complex" which provides arguments against the most popular pseudoscientific hypotheses about Plato's Atlantis. These hypotheses are based on a literalist reading of the story, not putting the 9,000 years into context – it's the same mistake most invention hypotheses make. In the meantime, I have used this page in many internet discussions about Atlantis, and to my own surprise, in roughly 50% of all cases I have success! The page is well-received by people who have no clue and found the 10,000 BC hypotheses convincing at first glance. This confirms my conviction that pseudoscientific Altantis hypotheses live for a good part from scientists being too strict in their judgements about Atlantis hypotheses. Even uneducated readers can see that the Atlantis story is meant real though they are unable to figure out how this can be.