Reviewed by Thorwald C. Franke, Atlantis Newsletter No. 170 (10 June 2021). With thanks to the editor Böhlau-Verlag, Wien / Köln / Weimar, who kindly offered this book for reviewing. 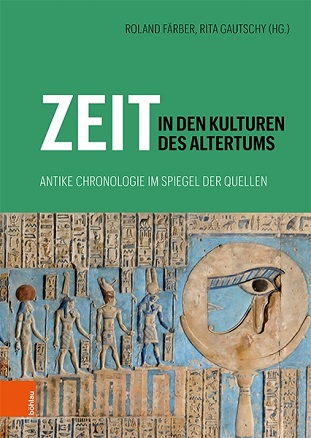 The work edited by Roland Färber and Rita Gautschy is a veritable treasure trove of source material on the subject of chronology. A total of 60 sometimes more, sometimes less well-known individual sources are systematically prepared and made accessible. Each source is first reproduced in the original text, if necessary with transliteration. This is followed by a translation and a general explanation of the source, with references to related sources. Then "technical" aspects of the chronological reference of the source are explained. Finally, the socio-cultural significance of the chronological reference of the source is evaluated. There is a separate bibliography for each source. Frequently, illustrations and schematic drawings of high quality are also included. The preparation of the sources is truly exemplary. It creates a lot of clarity and overview and makes the reader's life much easier. The glossary of chronological and calendrical terms at the end of the book is also extremely helpful.

Not only Greek and Roman sources, i.e. "classical" antiquity, are considered, but also sources from ancient Egypt and Mesopotamia and Judaism. This is very valuable, because there are references here, also to classical antiquity, which traditionally are rarely considered in research. The original texts are not only in Greek and Latin, but also in hieroglyphics, cuneiform, and Hebrew.

The focus of the work is on chronology as a socio-cultural phenomenon. For the purposes of this book, this means that for each source it is asked what significance the chronological reference had in each case for the concrete life situation of the people of that time. Therefore, the focus of the work is on chronologies that are close to everyday life and "practical", such as calendars for feast days and agriculture or the division of the year into months or the day into hours and sections.

Less attention is paid to more far-reaching chronological aspects that go beyond the concrete lives of people. For example, the Palermo Stone with its annals of Egyptian kings is interpreted first and foremost from the perspective of "social" chronology: first, connections between festivals and the flooding of the Nile in the course of the year are mentioned, as well as annually recurring taxes. Only then, in only a few lines, is the overarching chronology constituted by the Palermo Stone discussed. Unfortunately, this narrow socio-cultural perspective of this publication is not made clear in the title of the work.

Thus, mythical chronologies, such as Hesiod's view of prehistory as a succession of a golden, a silver, a bronze, and an iron age, are largely absent. Significantly, Hesiod is cited as a source only in relation to the days of the month. Other mythical divisions of the prehistoric times do not appear either, such as the age of Cronus, or the mythical age of battles with Titans, Amazons and the deeds of the heroes, which is said to have been in a distant prehistoric time. Also missing are euhemeristic chronologies that arose out of attempts at demythologisation. For example, the Parian Chronicle, which records the mythical prehistory of Athens in concrete years and also dates mythical flood catastrophes such as the Deucalionic Flood. Such sources are also lacking for Judaism, for example Philo of Alexandria and his significance for biblical chronology. And finally, the (pre-)scientific chronologies of historians and philosophers are also missing, for example Herodotus' erroneous assumption that Egypt was 11,340 years old and older, or Plato's opinion that Egypt was at least 10,000 years old and that history repeats itself in long cycles of cultural rise and cultural decay.

These chronologies, which extend far beyond the life of the individual, can very well have a noticeable socio-cultural effect in everyday life. There is a big difference between living in a sense of time that nothing changes and past and future are essentially identical, as the ancient Egyptians did (at least in the eyes of the Greeks) – and having a cyclical view of history. While we are talking about cycles of many millennia, it makes a big difference whether one imagines oneself at the beginning, in the middle, or at the end of a cycle. Plato, for example, believed that the development of culture was approaching its peak in his time: The ideal state had been conceived and only needed to be implemented – and after that comes the inevitable cultural downfall, albeit not immediately, but measured in centuries. Gunnar Rudberg spoke here of a fin-de-siècle mood of Plato. Again, the world looked different to the Christians, who believed in a linear progression of time from creation through the appearance of Jesus Christ to the Day of Judgement, in a narrow time frame of only about 6,000 years.

The socio-cultural significance of these chronologies becomes clear in many ways. For example, mythical prehistory was always present in epics and temple friezes and festivals. The dating of a festival day is very concrete in everyday life, but the contents of the festivals often reflect an event beyond the everyday chronology. The socio-cultural significance of the more far-reaching chronologies also became clear in the dispute between the scientific chronology of the Platonists and the new chronology of the Christians. Well-known, for example, is Origen's treatise Contra Celsum against the Platonic philosopher Celsus. For Augustine, a biblical chronology of a few millennia was a foregone conclusion. This perspective was only overcome in the course of the modern era, initially with the help of those ancient texts that spoke of older ages.

However, the consideration of these more far-reaching chronologies would have required a separate volume. The present work is therefore thematically well rounded from the chosen perspective of more "true-to-life" socio-cultural aspects. However, one would have liked the chosen perspective with its limitations to be expressed more clearly in the title. And perhaps one day there will be another volume that adds the missing aspects. This work does nothing wrong, but everything right – only something is missing.

With regard to the interpretation of Plato's Atlantis, this book does not provide any immediately helpful information. The 9,000 years of Atlantis belong to a chronology that extends beyond the life of the individual, and such chronologies are hardly dealt with. Perhaps, in connection with one of the many sources on feast days, one could find a clue as to why the kings of Atlantis gathered every four or five years. However, nothing has come to the attention of the reviewer. Maybe the letter of Mar-Issar on intercalation and the Metonic cycle could give a hint?