Sir Desmond Lee unexpectedly argues
for the reality of Atlantis

Sir Desmond Lee (1908-1993) was an English Classicist specialized on ancient philosophy, teaching at the University of Cambridge. One of his opinions was to defend Plato against the accusation that by his concept of a deceptive myth (or "Noble Lie") he supported the propagandistic manipulation of the masses. This reveals a deeper insight into Plato's thought. An obituary tells that those who knew him found him "either intellectually stimulating or maddeningly remote". 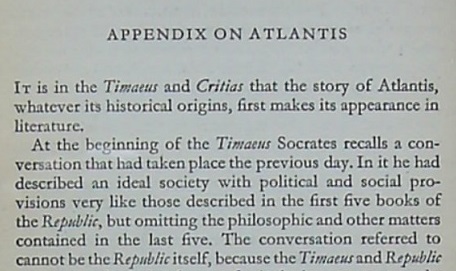 Pic.: First words of the Appendix on Atlantis

An Atlantis thesis of higher quality

In 1971 Desmond Lee added an "Appendix on Atlantis" to his translation of Plato's Timaeus-Critias, presenting his opinion about the reality status of Plato's Atlantis. These 22 pages pack a punch. Desmond Lee has seen and understood more than many others.

For example, it did not escape his attention that Aristotle, too, assumes a cyclical downfall and new rise of civilization and mentions the mud in front of the sea straits of Gibraltar  just as Plato in the Atlantis account. Lee clearly recognizes that the dialogue preceding the Timaeus was meant to be a revised version of the Republic, and that the missing dialogue Hermocrates was intended to describe the new rise of civilization. Lee raises the question whether the break-off of the Critias dialogue could have something to do with the events on Sicily, a question which unfortunately is out of fashion today. According to Lee Hermocrates could have been aimed at Plato's friend Dion. Unfounded number speculations for the interpretation of Atlantis are clearly rejected by Lee: "Such speculations are profitless, whether they come from the learned, with elaborate parallels from Plato's other dialogues, or merely from cranks."

Of course, even Lee shows some weaknesses of which we want to show only examples: The explanation of the 9000 years by the factor 10 is too easy, of course. Here, Lee better had relied on a comparison with the errors of other Greek historians. And it is not true that there is explicit information about the extent of the island of Atlantis; we only know something about the extent of the plain on this island. Also not true is, that the houses of the city of Atlantis were built along the outer wall as Plato later plans in the Laws.

A clear historical core is conceded

For Desmond Lee, the tradition of the Atlantis account via Solon from Egypt basically is chronologically possible. He is not troubled, either, that except Plato no one else knew of this story: "Nor does it seem to me in the least surprising that the story should occur only in Plato. By his own account it had survived as, so to speak, a bit of family gossip in Critias' family."

Yet, Lee even goes further: "And I am prepared to go so far as to say that there may be some foundation in fact in Plato's tale." And: "But Solon might have heard a story of a powerful island people overwhelmed by some natural disaster; and perhaps of its involvement at one point in an unsuccessful war". For Lee, this could only have been some catastrophe in the Mediterranean in historical times. By this argumentation, Lee finally arrives at the Minoan civilization as a candidate for Atlantis. The sacrificial ritual is considered possible but he sees no convincing detail in our knowledge about the Minoan sacrificial ritual.

Finally, the discovery that once an enormous eruption of the Thera volcano happened is convincing for Lee: "There was nothing in the Greek mind or memory to connect it with Crete, and all Plato did (if he did anything) was to pick it up as something he could incorporate in his latest account of early human history." Lee even names a concrete place which could have been Atlantis: "It is tempting, as one stands on the site of Phaestos, looking over the plain of Messara, to suppose that this is the low hill on which the citadel of Atlantis was built, that Phaestos was Atlantis and the plain of Messara (with suitable irrigation works) the 'most beautiful of all plains' described by Plato." 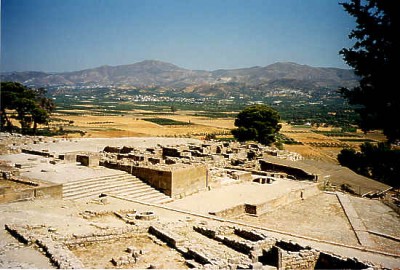 Pic.: View from Phaestos into the plain of Messara

Nevertheless Atlantis is no real place for Lee

Other than what one might suppose, Lee feels obliged to resist the temptation to see Atlantis as a real place e.g. in the Minoan civilization. For Lee, the Atlantis account is "imaginary history" and "science fiction" in the past, despite of a possible historical core. For this, Lee gives the following reasons: 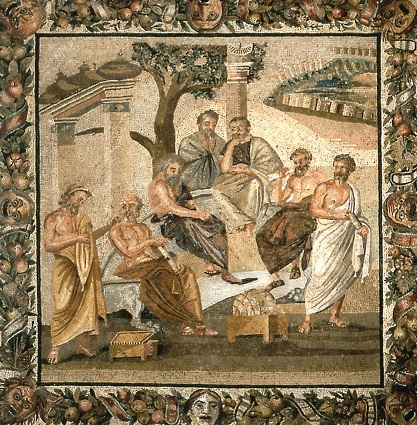 Lee's arguments against the reality of Atlantis are not cogent

We have seen that Lee considers a clear historical background of the Atlantis account to be possible. For him, it is all about the question whether this historical background deserves to be called Atlantis. It honours Lee that he introduces this question and this distinction into the discussion. Most Atlantis skeptics overlook the problem. Yet Lee's arguments against the reality of Atlantis are not cogent:

Desmond Lee unexpectedly argued for the reality of Atlantis

As we can see, all interpretational arguments which allegedly or really hindered Lee to see a real Atlantis in a possible historical background prove to be ineffective. While accepting a possible historical background yet at the same time overcautiously rejecting any reality of Atlantis despite all reality, Desmond Lee is even more self-contradictory than the Austrian Theodor Gomperz. 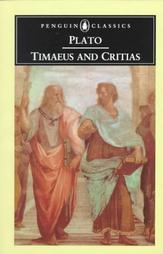 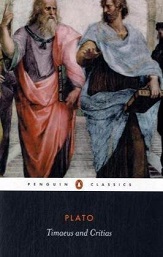 In 2008 Lee's "Appendix on Atlantis" was removed

In 2008 Dr Thomas Kjeller Johansen from the University of Oxford revised Lee's translation of the Timaeus-Critias on behalf of the publisher Penguin Books/Penguin Classics. In the course of this revision Dr Johansen decided to remove the "Appendix on Atlantis". In an e-mail from April 30th, 2014, he gave the following reasons:

"The new edition of the Timaeus and Critias was revised, not just in respect of omitting the Appendix, but also in offering a new introduction and explanatory notes. The translation was also extensively revised. While the translation remains essentially that of Lee, I don't think it is correct in this context to talk of dividing the author's work by separating translation and the Appendix. One objective in revising the edition was to bring it up to date in relation to contemporary scholarship, which means primarily Anglophone scholarship given Penguin's readership. It would not have been either appropriate or possible for me to try to update the Appendix. However, the thesis that Atlantis was somehow a historical reality is discussed in my introduction, and reference is made to work that follows this hypothesis, as well as the difficulties I see with it. There is nothing underhand (no 'censorship') therefore about the omission of the Appendix. The interested reader will in any case have no difficulty finding the old edition, which is still in wide circulation."

The publisher Penguin Books/Penguin Classics wrote per e-mail, in April 2014:

"Should you wish to purchase an edition including the appendix, I suggest you try to locate a copy of the 1977 edition, which is, unfortunately, out of print, as we have replaced it with the revised 2008 edition."  On the suggestion to put Lee's appendix on the internet for free, since it is out of print: "As for making text still under copyright available on the internet, this is out of the question. It is not a matter of censorship, far from it, as the previous edition is still widely available, but I am not prepared to infringe the rights of the copyright holders, in this instance Lee's heirs."

Who today buys a new copy of Lee's translation at regular booksellers gets to know nothing about Lee's thoughts on Atlantis. Lee's "Appendix on Atlantis" is available only at antiquarian booksellers in old editions from 1971 resp. 1977. It is allowed to produce private copies for scientific purposes.

Lee (1971/1977): Desmond Lee, Plato  Timaeus and Critias, Translated with an introduction and an Appendix on Atlantis by Desmond Lee, The Penguin Classics series, Penguin Books, Harmondsworth 1971; reprinted with revisions 1977; pp. 146-167.
Available only at antiquarian book stores such as: abebooks.com - abebooks.co.uk - abebooks.de

Thanks to Oliver D. Smith
who had drawn my attention to Lee's Appendix on Atlantis.